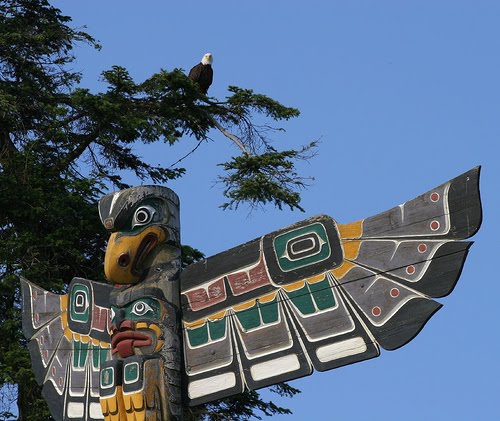 Now is the Time to Reforest America

"Any fool can destroy trees. They cannot run away; and if they could, they would still be destroyed - chased and hunted down as long as fun or a dollar could be got out of their bark hides. Branching horns, or magnificent bole backbones. Few that fell trees plant them; nor would planting avail much towards getting back anything like the noble primeval forests. It took more than three thousand years to make some of the trees in these Western woods - trees that are still standing in perfect strength and beauty, waving and singing in the mighty forests of the Sierra. Through all the wonderful, eventful centuries God has cared for these trees, saved them from drought, disease, avalanches, and a thousand straining, leveling tempests and floods; but he cannot save them from fools - only Uncle Sam can do that. "
Posted by jack enright at 9:14 PM 1 comment:

Fifteen thousand years ago, the New World was wild and unfettered by civilization. Forests reached the skies in unbroken ranks facing the glacier onslaught. Bison thundered on the plains, feeding on lush grasses. Ferocious carnivores rivaled the mighty wolf pack,stalking the herds. Flocks of birds blackened the Sun during their migration to the glacier fed lakes. Salmon choked rivers and streams. Wildflowers covered meadows in bright dazzling colors. Tribes of people hunting Nature's bounty wandered free and exuberant in the glory of Earth and Sky. Back in the 21st century, Tim and Phil journeyed into the wilds of Oregon. Being experienced outdoorsmen, they thought they knew about the nature of hunting and fishing in the fields and streams of America. Until one fateful day their conception of the Wilderness would change forever.
Posted by jack enright at 6:00 PM No comments:

Excerpt from Return of the Ancient Mariners

Coming in closer, the other boat still in the water, the boys cried out again... something like moogwa...but then again more like moogwanakay ..they raised their spears as they cried, their faces toward the heavens as if pleading. Looking at them in astonishment, we waited for them to lower their spears. After staring at each other for what seemed an eternity, Phil offered them our catch.


At this gesture, their grim faces of stone changed and smiles broke over their bright faces with white gleaming teeth. A shadow covered us momentarily like the shape of a plane but silent, looking up we saw a terrible sight. The wingspan exceeded fifteen foot on the body of the great eagle. Below the breast was white, above dark brown like a golden eagle. The head was like an eagle with a long yellow beak and golden feathers streaked with red and white topped with a crest of golden yellow. The great bird flew past us toward the northeast shore barely flapping its wings. Before we could regain our senses, the two boys were gesturing at us as if we knew the bird yelling... wipajakyti kree kree. Phil pointed toward the cave where we were planning to go.

Somehow we understood that there was something terrible in that direction. So we followed them as they rowed to the direction the great bird flew.
Posted by jack enright at 4:50 PM No comments:

Return of the Ancient Mariners

Return of the Ancient Mariners, is an adventure story that begins when two friends emerge from a cave to find a New World. On the first day they are startled to see a large bird fly overhead. Thunderbird. Throughout the story Thunderbird guides and inspires the tribe of Native Americans. It is a mutual friendship of respect and protection. The tribe protects Thunderbird's eggs from predation. Thunderbird watches the tribe overhead, leads them to Bison herds and warns them of danger. At night in the stars they see Thunderbird in flight, a beacon to guide their journey on the spirit road, Utelmuk.
Posted by jack enright at 8:59 AM No comments:

Return of the Ancient Mariners


To order a Kindle version, Press the Amazon icon above. You may also order the paperback via Amazon with their shipping options.

We appreciate your comments here and especially your reviews on Amazon. com/Return of the Ancient Mariners. You can find this page by clicking on the title of the first page on Amazon or the pic of the book. Thank you and enjoy reading.

Check out My Amazon store for camping gear etc.